It is with great regret that the Journal records the death of one of its most longstanding contributors, Robert “Bob” Baxt AO, on 11 March 2018. At the time of his death, Bob had the unique distinction of editing two ALJ columns: Competition and Consumer Law, and Corporations and Securities. To express gratitude for his extraordinary contribution to the Journal is necessary but also inadequate.

Few Australian lawyers have excelled in so many ways and been so prodigious in their output. His achievements included law school dean, Trade Practices Commission chair, law firm partner and recipient of the Centenary Medal and the Order of Australia. Bob is first recorded as a contributor to the Journal in Volume 40 (1966–1967) and his inaugural Commercial Law Notes section is to be found at (1969) 43 ALJ 239. His publications would take many pages to list. He continued to provide contributions to the Journal in the last few months of his life with determination and good humour. The General Editor, Assistant Editors and the editorial staff of Thomson Reuters extend their deepest sympathy to his family.

Tribute by the Hon R I Barrett:*

Robert Baxt AO, who has died in Melbourne aged 79, was a dominant figure in Australian business law and public life for half a century.

Born in Japanese occupied Shanghai in 1938, he arrived in Sydney with his family in 1947 and attended Newington College. After graduating BA and LLB (Hons) from the University of Sydney and serving articles of clerkship (including in the office of Myer Rosenblum where future prime minister John Howard was also a clerk), he was admitted to practise as a solicitor in July 1962. He went soon afterwards to Harvard Law School on a scholarship, returning with a master’s degree and a keen interest in antitrust law.

After a short period with Freehill Hollingdale and Page, Bob Baxt embarked on what was to become an illustrious career as a legal academic, first as a lecturer in commercial and industrial law in the faculty of economics at the University of Sydney and, from 1967, at the law school of the newly established Monash University. He was appointed Sir John Latham Professor of Law at Monash in August 1972 and became dean in 1980.

At Monash, Baxt looked beyond the classroom and traditional boundaries. With Professors Maureen Brunt and Allan Fels, he taught interdisciplinary graduate seminars on restrictive trade practices. He was a consultant to Arnold Bloch Leibler from 1986 and in that way kept touch with legal practice. Upon the establishment of the Centre for Commercial Law and Applied Legal Research at Monash in 1985, Baxt became its director. The centre fitted his strategy of bringing legal education and discussion to a wider audience in the legal and business community. It became a platform for workshops at which the academy and the profession came together to discuss commercial law issues of the day. Workshops on competition and restrictive practices law, corporate law, media law and taxation established by Baxt in the 1980s while at Monash later came under the auspices of the Law Council of Australia. He remained influential in these activities until his death.

In April 1988, at the height of his innovative and productive career as an educator, Baxt accepted appointment as chairman of the Trade Practices Commission. He predicted that “an interesting time” lay ahead, commenting that people were concerned about the number of mergers and the growth of monopolies. His early days were marked by public airing of disagreement with his predecessor, W R McComas, over an apparent hardening of policy towards negotiated outcomes in more challenging merger cases. Baxt summed the matter up in the title of a public seminar in Sydney arranged by the Commission in the month after his arrival: “Same direction, different approach".

Baxt’s first year witnessed something of a reinvigoration of the Commission. It obtained divestment orders in merger litigation against Australian Meat Holdings, won a resale price maintenance case by use of taped telephone conversations, pursued against a plasterboard manufacturer the first monopolisation case in a decade, defended a test case to define its investigative powers and took a strong stance in public debate over a new pricing and marketing system proposed by major oil companies.

In his inaugural chairman’s report, Baxt called for more finance and staff, pointing out that the Commission was often pitted against very well resourced commercial interests. This was a theme to which he frequently returned. On leaving office at the end of his three-year term, he lamented to the National Press Club that, because of lack of resources, the Commission had been forced to pick lead cases in the hope of establishing precedents and that his determination to reduce negotiated outcomes had not been fully realised. On some occasions, he said, the Commission had been “trampled on” by companies whose message to the regulator was, “You can’t touch us.”  As Baxt saw things, law reform was needed because “huge and powerful corporations” were not constrained by competition law as it stood.

Despite these frustrations, Baxt is credited with having run an efficient and effective agency. He sought enhanced public accountability at the commission through several institutional channels. He introduced new strength through the recruitment of economist Brian Johns and consumer advocate and lawyer Alan Asher as full-time commissioners, and the appointment of several part-time commissioners. He promoted staff morale by fostering stronger personal contact with everyone in the commission. With his family in Melbourne and the Commission headquartered in Canberra, the decision to leave was his own.

Baxt began his third career in 1991 when he joined Arthur Robinson & Hedderwicks (later Allens Arthur Robinson) as a partner. He moved to Freehills (now Herbert Smith Freehills) as a partner in 2005 and became Partner Emeritus in 2011. As a practitioner, he continued to offer comment and criticism on commercial law developments and maintained his close involvement in legal education and awareness. A member of the Business Law Section of the Law Council of Australia from its inception in 1980, he served on the section’s executive for more than 30 years and was its chairman in 2001–2003. He founded the Banking Law Association (now Banking and Financial Services Law Association) in 1983 and established its highly successful annual conferences; and was chairman of the Law Committee of the Australian Institute of Company Directors from its creation in 1994.

In his later years, he was a Professorial Fellow at Melbourne Law School, chair of the advisory board for the competition and consumer law specialisation in the Melbourne master of laws program and an honorary professor at Griffith University. In 2011, Melbourne University established an annual Baxt Lecture in recognition of his substantial contribution to the development of Australian competition law. In 2017, the Law Council’s Business Law Section offered, for the first time, the Baxt Prize for an outstanding research paper on the topic of human rights and business law

Baxt was the recipient of honorary doctorates conferred by Griffith University and, shortly before his death, by Monash University. He was awarded the Centenary Medal in 2001 and appointed an Officer in the General Division of the Order of Australia in 2003 for service to the law, particularly as a leading spokesperson in the area of trade practices.

From the very start, Baxt was a prolific writer. In 1966 alone, no fewer than 13 articles written by him appeared in law and accounting journals. He was the inaugural editor of the Monash University Law Review in 1974 and, in more recent years, wrote The Baxt Report, a monthly newsletter on corporate regulation. Books on corporate law and governance, the securities industry, financial services, trusts, managed investment schemes, auditors and, of course, competition law were authored by Baxt, some jointly. Names associated with Baxt’s in collaborative works include Brunt, Hardingham, Afterman, Ford, Samuel, Fletcher, Hanrahan, Black, Archibald, Finnane, Kewley and Harris. A collection of Baxt’s writings was published in 2015 under the title Bob’s Best. His writing was authoritative, accessible and highly topical.

Bob Baxt made a formidable contribution to Australian business law and public life as a scholar, teacher, author, regulator, adviser and practitioner. He was passionate about the law. His passion was infectious. His agile and energetic brain ranged over every aspect of whichever legal topic was to hand. This was particularly evident at the workshops and conferences he enjoyed so much. After a speaker or panel had analysed an issue, the first comment from the floor would very likely be Bob’s. His contribution would be thoughtful and closely reasoned but not always brief. And the following coffee or lunch break would be welcomed as an opportunity for elaboration.

Bob Baxt is survived by his wife, Ruth, their daughters, Miriam and Simone, and three granddaughters. Ruth was his constant companion throughout their married life of 56 years. She became involved in his professional activities and a friend to many of his colleagues.

*The full obituary written by the Honourable Reg Barrett will be published in a forthcoming issue of the ALJ.

Thomson Reuters was saddened to learn of the passing of Professor Bob Baxt AO on 11 March 2018.

“Professor Baxt was renowned for his longstanding commitment and contribution to business law in... 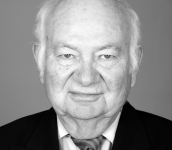